Organised by the West Suffolk & Borders Branch of the Campaign for Real Ale. 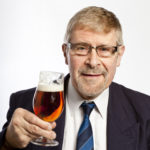 Roger Protz is one of the world’s leading beer writers. He has written more than 20 books on the subject — the latest is IPA, A Legend in Our Time, and is currently working on Beer Heroes — the family brewers of Britain. He edited 24 editions of the CAMRA Good Beer Guide before stepping down in 2018. He gives regular talks and tastings at the Great British Beer Festival and BBC Food Show and has given talks at the Smithsonian Museum in Washington DC and Beer Expo in Melbourne, Australia. In 2016 the BBC Radio 4 Food Programme devoted an entire edition to his life and work. He writes for What’s Brewing, Ferment and BEER magazine and runs his own website, protzonbeer.co.uk. In his limited spare time, he supports Essex CCC and West Ham United.